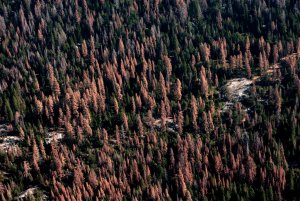 Tree die-offs have a tremendous impact on local ecosystems. But could the consequences extend beyond the surrounding area? New research suggests the answer is yes.

A new paper (Continental-scale consequences of tree die-offs in North America: identifying where forest loss matters most), published May 16 in Environmental Research Letters, examines how regional-scale deforestation or tree loss events impact climate and vegetation growth across the continent. The results indicate that regional forest die-offs in some parts of the country can have measurable impacts on growing conditions across the continent. The effect was especially strong for forest die-off events in California, an area currently experiencing heavy tree mortality due to forest fires, drought, insects and disease.

The study divided the country into regions using the ecoclimate domains defined and used by the NEON project. The 20 NEON domains were created by statistically partitioning the United States (including Alaska, Hawaii and Puerto Rico) into distinct regions of vegetation, landforms and ecosystem dynamics. The tree die-off study looked at the effects of tree die offs in the 13 most heavily treed NEON domains of the U.S. on 18 of the 20 NEON domains (excluding the Hawaiian Pacific Tropical domain and the Neotropical domain, which covers the southern tip of Florida and Puerto Rico).

Researchers then ran climate models to see what would happen to vegetation growth patterns across the continent when forest cover was removed from different regions. The models looked at the impact of tree loss in 13 of the NEON domains using Gross Primary Productivity (GPP)—the total biomass fixed by vegetation in an area at a given point in time—to measure the effect on vegetation growth in each of the 18 domains studied.

The models showed that tree loss in some regions had an outsized effect on areas across the continent. Other regions showed special sensitivity to tree loss in other parts of the country, regardless of the region where tree loss originated.

Removing trees in the Pacific Southwest region, which encompasses most of California, had the biggest impact on plant growth across the country. While the region has the smallest total area of tree cover, losses of trees in California significantly reduced GPP in the Eastern U.S. Tree loss in the Great Basin region (encompassing eastern Washington and Oregon, most of Nevada, and parts of Idaho, Wyoming and Utah) and the Northern Rockies also demonstrated large effects on other regions.

Understanding these interdependencies between remote regions—which the researchers call teleconnections—will help to improve models of climate change impact and predict the carbon storage potential of vegetation in different regions under different climate scenarios. The results could also inform coordinated land use planning and ecosystem protection efforts across regions.

While the exact mechanisms have not yet been fully investigated, the models suggest that forest loss disrupts the climate by changing flow patterns in the atmosphere. This works in much the same way that El Niño and La Niña (cyclical changes in ocean surface temperatures) impact weather patterns across the globe in the years in which they occur.

The study suggests that tree loss in the western regions of the U.S. results in slightly warmer summers in the eastern regions. This temperature increase is harmful to plant growth, resulting in reduced GPP.

Forests have a significant impact on both local ecology and global climate. Trees act as a carbon sink, storing carbon and keeping it out of the atmosphere. Tree cover also impacts the amount of energy absorbed or reflected from the earth's surface as well as moisture levels in the atmosphere. When forests are lost to deforestation, disease, pests or climate-related die offs, the loss impacts summertime surface temperatures, precipitation patterns and low cloud cover across the continent. This has a ricochet effect that impacts weather and resulting plant growth far from the region where the die-off occurred.

Many regions of the country are currently experiencing large tree die-offs. Drought and high temperatures put stress on trees and make them more susceptible to pests and diseases. At the same time, warmer temperatures have allowed many pests and pathogens to expand their range and the percentage of time during the year that they remain active. Insects such as the emerald ash borer and mountain pine beetle and fungal or bacterial pathogens have devastated forests across the country. Forests in western states have also been threatened by a growing number of wildfires due to climate change.

While many researchers have studied local ecological impacts of tree die-offs, this is the first study of its kind to look at the cross-continental impact on climate patterns and vegetation growth. The results indicate that teleconnections between regions are stronger than previously estimated, meaning that localized tree die-offs can impact ecosystems across the entire country.

Further studies are needed to clarify the mechanisms behind these teleconnections and refine climate change models that include the impact of tree die-offs and deforestation.

Co-author David Breshears says, "Ecologists have a lot of experience in scaling up—that is, building models that look at data at a small scale and then scaling up to model effects across larger areas. We have less experience in thinking about how areas are interconnected at very large scales. Understanding the impact of changes in a region across the continent will require ecologists to think about connections between environments, the atmosphere and climate." Building models of continental-scale effects and interrelationships between regions could help inform coordinated plans for carbon management and ecosystem protection.

The authors hope to eventually follow up on this study with additional research into the mechanisms behind teleconnections between regions. While this study did not use data from the NEON project, as more data become available from the NEON field sites they could be incorporated into future studies of ecoclimate interconnections. Having consistent, comparable data from all of the NEON domains will help researchers identify other types of interconnections and refine continental-scale models of climate and ecosystem change. Breshears says, "The next step is testing these models and building out data to support model development. Data sets like those collected by the NEON project will give us a more robust understanding of continental-scale ecology."

Examining the Drivers of Forest Productivity
June 11, 2020
Modeling the Spread of Ticks—And the Diseases They Carry
May 27, 2020
What’s That Tree? This Neural Net Can Tell You
June 17, 2020