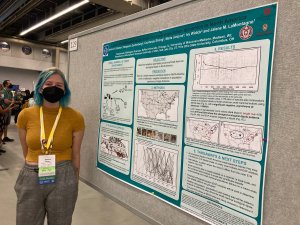 In August, the Ecological Society of America (ESA) and the Canadian Society for Ecology and Evolution (CSEE) held a joint meeting in Montréal. ESA/CSEE 2022 was the first in-person meeting for the societies since 2019, and there were plenty of reasons to be excited. Our favorite? Seeing talks and posters from researchers who are leveraging NEON data to explore critical questions in ecology, from population dynamics to carbon cycling. Here are three that caught our eye.

Dr. Ashley Lang, an NSF Postdoctoral Fellow in the Indiana University Department of Biology, used NEON soil data to investigate how different kinds of forests store carbon in soil differently. She says, “Soil is a huge reservoir for carbon storage. I’m interested in the ways in which it traps carbon underground and keeps it out of the atmosphere. In particular, I was focused on forest soils and how features such as the types of trees, overall climate, and minerals in the soil influence both the total amount of carbon and the way carbon is stored.”

Her talk (Climate, soil mineralogy, and mycorrhizal fungi influence soil organic matter fractions in forests across the National Ecological Observatory Network) examined how these different factors impact soil organic matter (SOM) at seven NEON woody forests in the eastern U.S. She was particularly interested in relationships between soils, trees, and the types of fungi that live in the soil. In addition to looking at total SOM, she also wanted to find out what proportion of carbon is held in organic material that decomposes easily versus more stable mineral-based carbon types. Lang’s research discovered intriguing connections between tree-fungal (mycorrhizal) relationships, mineral content in the soil, and the amount and type of carbon held in the soil. She explains, “Certain forms of soil carbon are less susceptible to being decomposed and released back into the atmosphere. We wanted to identify the types of forests where carbon is least likely to be released back into the atmosphere. That will help us build better climate models of how much carbon may be released from different types of forests over time, and potentially help us identify the kinds of ecosystems that are important to preserve from a carbon perspective.”

To complete the research, Lang and her coauthors relied on dried soil samples from the NEON Biorepository. They analyzed the samples from different plots in each forested site to determine which types of fungi and minerals were present. They were able to match each sample with plot-level NEON data on tree species relative abundance to find relationships between fungal types, tree species, mineral composition, and SOM. Now, they are planning to conduct additional analysis to get a better picture of how stable carbon is in each of the samples.

Lang says, “I was so grateful to have the NEON Biorepository available. It would have been difficult or impossible to travel to all these sites to collect samples, especially during COVID and while I was on parental leave. People were really helpful in explaining what was available and getting me the samples we needed.”

Barton explains, “We were looking for what is called an ecological dipole in the data—that is, data characterized by opposite extremes when you look across large distances.” Mast seeding tends to have a strong dipole pattern, with similar patterns found when comparing nearby sites and opposite patterns found in sites located far away from each other. Barton and her coauthors wanted to find out whether small mammal populations followed a similar dipole pattern.

Data from 18 NEON terrestrial field sites revealed that small mammal populations do indeed follow a dipole pattern; populations from sites nearby tended to have similar dynamics, while comparing population dynamics from distant sites showed negative correlations. Barton says, “To our knowledge, this is the first North American study that shows how small mammal populations behave on a continental scale; most studies are conducted on a local or regional scale because the data just hasn’t been available to look at this scale. NEON really enables continental-scale analysis that hasn’t been possible before.”

Next, Barton and collaborators in Dr. Jalene LaMontagne’s lab at DePaul plan to correlate the small mammal data from NEON with mast seeding and weather data, to see whether direct links can be found between a mast-seeding event and a small mammal population boom (which she would expect to see in the following year). They are collecting observations of tree seed production at NEON sites through an Assignable Assets program funded by an NSF grant. The results could enable researchers to predict when and where small mammal populations might spike. These spikes could have impacts on human health and wellbeing, such as crop damage or the spread of diseases carried by rodents or the ticks that travel with them.

Tick and Tick-Borne Disease Dynamics on a Continental Scale

Speaking of ticks and disease spread, Sofia Rivera, a graduate student in Dr. LaMontagne’s lab at DePaul University, submitted a related poster on tick and tick-borne disease dynamics across the continental U.S., which may follow similar patterns to the small mammals in Barton’s study. Tick abundance, and the diseases they carry, could be expected to correlate to rises and falls in small mammal populations. Ultimately, the researchers would like to find potential correlations between mast seeding, small mammals, ticks, and tick-borne diseases.

Rivera says, “The prevalence of tick-borne diseases (such as Lyme Disease) has exploded over the last several years, and we’re seeing the spread of these diseases into colder areas where they were previously uncommon. This research could be used to help develop better models to explain tick abundance and pathogen abundance. For example, how we can predict which areas might expect to see an increase in tick-borne pathogens at which times.”

For this study, Rivera and her coauthors used tick nymph abundance data from 16 NEON forested sites. Nymph data were used because most tick-borne diseases are more likely to be spread by nymphs, which are harder to see and remove. Like the small mammals in Barton’s study, tick populations showed more synchrony across small distances and were less synchronized across larger distances. However, there was not a strong dipole pattern. Rather, results showed that tick population dynamics are highly variable across both space and time. “We don’t yet have a model explaining this,” Rivera says. “It may depend on land cover types. We also see a lot of variation between species of ticks.”

Rivera is moving on to veterinary school, but she says others in the LaMontagne lab plan to carry this work forward to look for more correlations between mast seeding events, small mammal populations, ticks, and tick-borne diseases. She appreciated the availability of continental-scale data from the NEON program, which allowed her to look at tick data alongside vegetation cover and climate data from the same plots. “There is so much data available from NEON, so I was able to be really picky and filter it down to just the data I really wanted—like looking at just the nymph data for ticks. Having so much data for different sites and across years is so useful because we can start looking for patterns that explain what’s happening.”