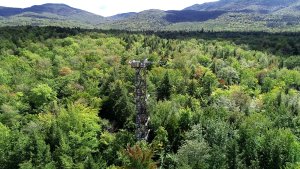 From the mountains of Maine to the streets of Manhattan, the Northeast (Domain 01) contains something for everyone. The Domain features a variety of natural habitats as well as some of the largest and oldest urban areas in the U.S. The NEON field sites in Massachusetts and New Hampshire provide opportunities to study how these ecosystems are responding to pressures from climate change, invasive species, and human activities.

The Northeast Domain includes all of Maine, Vermont, New Hampshire, Massachusetts, Connecticut, Rhode Island, and New York plus parts of Pennsylvania, West Virginia, and New Jersey. It encompasses 149,000 square miles (385,000 km2) of the northeastern United States. The Domain boasts a number of mountainous and forested wilderness areas in the Alleghenies, Adirondacks, White Mountains, and the wilds of rural Maine. It also incorporates many of the most densely populated areas in the U.S. including New York City, Long Island, Boston, Pittsburgh, Hartford, Providence, and Buffalo.

The Northeast Domain is part of the Temperate Deciduous Forest Biome. It contains a wide variety of habitat ranging from Atlantic coastal plain to alpine tundra. The northernmost parts of the Domain are dominated by mixed boreal forests featuring a mix of spruce, fir, and hardwoods. Further south, where the NEON study sites are located, the area is primarily characterized by temperate mixed forests with broadleaf deciduous and coniferous species. These include red oak, red maple, white pine, and hemlock. Wetlands and grasslands can also be found throughout both coastal and inland areas. The topography varies widely, from the relatively flat coastal areas to the craggy cliffs and mountains that form the northern portion of the Appalachian chain.

The climate is temperate with four distinct seasons. Winters across most of the Domain are cold and snowy, with temperatures sometimes dropping below 0°F (-18°C). Summers are hot and humid, especially in the southern parts of the Domain.

Iconic animal species include large mammals such as moose, black bears, and white-tailed deer. You’ll also find a wide range of amphibians, turtles and an array of bats, small mammals and small carnivores such as weasels, fisher, and bobcat. The forests and grasslands are home to many species of songbird and a number of raptors, including red-tailed hawk, goshawk, barred owl, and saw-whet owl. The Domain is known for its rich marine and freshwater fisheries.

The Bartlett Experimental Forest is part of the White Mountain National Forest in the mountains of New Hampshire. It was established as an experimental forest in 1932 to study ecosystem function and structure in New England’s high forests and provide guidance for forest and wildlife management. The BART site is managed by the U.S. Forest Service.

The area was logged extensively starting in Colonial times, but most of the site has remained uncut since the early 1900s. About 30% of the site is still actively managed with controlled logging activities. It is nearly all forested, with upper elevations dominated by spruce and fir giving way to sugar maple, beech, and white pine at lower elevations.

Over the years, Bartlett has supported a range of research activities, mostly around forest management, regeneration methods, and forest response to disturbances. Some of the forest management studies conducted here are among the longest running of their kind in the U.S. Since 1995, Bartlett has also been used as a primary test site for novel airborne and spaceborne remote sensing technologies. Data collected by the NEON program will support and enrich ongoing research at the site with new insights into plant and animal species composition and the impact of climate change and invasive species at the site.

The Harvard Forest (HARV) terrestrial and Lower Hop Brook (HOPB) aquatic field sites are colocated in rural Massachusetts about 70 miles west of Boston. The NEON tower and some terrestrial sampling plots are located in Harvard Forest, managed by Harvard University. The remaining terrestrial field sites, along with the HOPB aquatic site, are located at the Quabbin Reservoir on land managed by the Massachusetts Department of Conservation and Recreation.

The area features a mix of forest (primarily hardwood-white pine-hemlock) and wetlands. Hop Brook is a wadable stream flowing into the Quabbin Reservoir. It is notable for supporting four species of salmonids: the native Eastern Brook Trout (Salvelinus fontinalis) and non-native Atlantic Salmon (Salmo salar), Rainbow Trout (Oncorhynchus mykiss), and Brown Trout (Salmo trutta), introduced to Quabbin for sport fishing in the mid-1900s.

Harvard Forest was established by Harvard University in 1907 as a field laboratory for students and scientists. It has been a Long-Term Ecological Research (LTER) site since 1988. Research by LTER and Harvard is focused on sustainable forestry and studying the impact of natural and human disturbances on forest ecosystems. The NEON program will build on this strong research foundation with a broad range of data products that can be compared to data collected at BART and other NEON sites.

The Quabbin Reservoir, built in the 1930s, is the largest inland body of water in Massachusetts and is the primary water supply for Boston and 40 other communities in the Greater Boston area. The site is managed by the state of Massachusetts for water supply protection. Management activities include controlled logging in some areas, mowing for field preservation, and some wildlife management including deer control and loon monitoring.

Monitoring Ecosystem Change in the Northeast

Across the Northeast Domain, habitats are under increasing pressure from human activities, invasive species, and a changing climate. Urbanization and agriculture have resulted in extensive habitat loss across much of the Domain, especially the densely populated areas along the coastal plain and across interior New York and Pennsylvania. Many areas in the northeast are also impacted by pollution from industrial and agricultural activities and large urban areas.

Climate change is expected to have a large impact on the northeastern U.S – Many changes have already been documented. Temperatures in the northeast increased by almost 2°F between 1895 and 2011, or an average of 0.16°F per decade. Over the same time period, precipitation increased by approximately 5 inches (127 mm) annually, a more than 10% increase. The region has also recorded a rise in sea level of about 1 foot (.3 m) since 1900, resulting in a significant increase in flooding events along the coasts. Over the next several decades, climate scientists expect to see these trends continue or accelerate. Changes in global air and ocean temperatures and weather patterns are also expected to result in more extreme weather events, including hurricanes, heat waves, torrential rains and flooding, and winter storms and blizzards.

Climate change is also implicated in another pervasive problem in the northeast: the growth of insect-borne diseases. Over the last 20 years, the northeast has seen an explosion of tick-borne diseases such as Lyme disease, babesiosis, and anaplasmosis. Several studies have linked tick activity and disease transmission to climate, in particular to abundant moisture in the late spring and early summer. Warm, wet summer weather has also increased habitat for Asian tiger mosquitos carrying West Nile Virus.

Data from NEON field sites in D01 will allow the science community to explore important questions around climate, community composition, and ecosystem health over the next three decades, and the field sites here provide a window into ecosystem change in the northeastern United States.