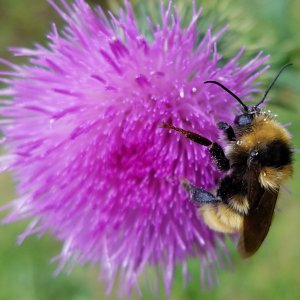 How do you measure the biodiversity of an ecosystem? A paper published in Nature Ecology & Evolution examines the use of species traits as Essential Biodiversity Variables (EBVs)—and how data products from NEON and other large-scale observatory networks can be used to monitor changes in biodiversity over time.

Biodiversity is defined as the overall variety of life forms present within an ecosystem. One key measure of biodiversity is the number of different species of animals, plants, fungi and microbes that make up the ecosystem which can indicate the health and resilience of an ecosystem.

Some ecosystems naturally support greater biodiversity than others—think of the natural diversity of a tropical rainforest compared to that of an arctic landscape or extreme desert. However, the biodiversity within each ecosystem is also changing over time as climate change, invasive species, habitat destruction and human activities put stress on native species. Over the last several decades, many ecosystems across the world have seen significant drops in both the abundance of endemic plant and animal species and in the overall diversity of species.

Changes in biodiversity can be difficult to measure objectively. The Essential Biodiversity Variables (EBV) framework was proposed in 2013 by the Group on Earth Observations Biodiversity Observation Network (GEO BON) to provide a standardized set of variables that can be measured in order to monitor changes in biodiversity and compare data across space and time. EBVs serve an analogous purpose as the Essential Climate Variables (ECV) framework used to monitor climate change.

The EVBs are organized into classes that focus on scales of measurement ranging from the individual (e.g., body mass, reproduction, or physiology) to population level (e.g., species range and abundance) to entire ecosystems.

Moving the EBVs from Concept to Operation

A paper published in the September 2018 issue of Nature Ecology & Evolution, "Towards Global Data Products of Essential Biodiversity Variables on Species Traits," takes a closer look at species traits in order to operationalize the species trait EBV class. These traits include measures of phenology (the seasonal timing of biological events such as budding and flowering in plants or migration and reproduction in animals), morphology (the form and structure of organisms, including animal body mass, plant height, leaf area, etc.), reproduction (age of maturity, number of offspring, etc.), physiology (chemical and physical functions), and movement (how far an organism moves from its place of birth, migration routes, etc.).

Rob Guralnick, a biodiversity scientist and Associate Curator at the University of Florida, was one of the coauthors of the paper. He has also played an advisory role to NEON over the years including his position on the 2019 Science, Technology & Education Advisory Committee (STEAC). (Other co-authors affiliated with the NEON project include Katie Jones, NEON Research Scientist for Plant Ecology; Sarah Elmendorf, former NEON Staff Scientist for Data Products; and Matt Jones, a long-time NEON Technical Working Group member.) Rob explains, "GEO BON conceptualized the EBVs and laid out the initial framework, but there was still a lot of work to do to operationalize it so researchers can use it to start collecting and sharing data. We wanted to help clarify exactly what should be measured and the tools that could be used to measure these variables on a global scale."

Developing clear definitions and protocols for the specific data products that make up the EBVs is an important step towards making the framework usable. The new paper proposes a core set of species trait types that can be measured and are relevant for producing change indicators. Monitoring these traits across different regions using consistent methods will ensure that data collected by different researchers is comparable and enable the research community to fill in gaps in our models of biodiversity.

Monitoring changes in species traits is important because it shows how organisms are responding to environmental disturbances or changes in climate. For example, rising average annual temperatures or changes in rainfall patterns may influence the timing of flowering for plant species in a region. This change has ripple effects not only for the individual plant species but also for other interacting species in the ecosystem, such as insect pollinators and bird species that depend on the flowers and fruit. A change in a species trait can be a bellwether for changes in the biodiversity of the ecosystem as a whole.

Just as the ECVs are being used to build better models of climate change, the EBVs will enable researchers to build better models of biodiversity. Rob says, "If we lose biodiversity, we lose essential functions of the ecosystem that we all depend on, like the pollinators we rely on for agricultural production or plant species that ensure we have clean air and water. If we want to preserve our wellbeing and way of life in the future, it is essential that we understand and protect these functions."

NEON Data and the EBVs

The NEON project will be an important source of biodiversity data in the years and decades to come. Many of the NEON data products—such as small mammal body mass, plant phenology and leaf area index—are aligned with the data products defined by the EBV framework. The scope and scale of the NEON project makes it especially valuable as a data source for monitoring changes in biodiversity across different ecosystems over an extended time period. The Observatory will provide standardized, quality data products from 20 ecoclimate zones across the U.S. for 30 years.

Rob says, "We're getting really good data from the NEON project that will help us fill in data gaps on a continental scale. The NEON data align well with the EBV concept and tie in nicely with other data sources."

Monitoring all of the variables defined in the EBV framework will require researchers to aggregate data from a variety of sources, including field observations, remote sensing, satellite and sensor data. Other data sources could include NASA, other observatory networks such as the Long-Term Ecological Research Network (LTER) and the Critical Zone Observatory (CZO), and individual researchers and academic teams.

"We have a lot more tools, sensors and data to work with now, but we have to be able to pull them together and aggregate them in a way that makes sense," says Rob. "The NEON project is not only a rich source for biodiversity data products but acts as a natural connector between organizations. As we continue to develop the EBVs and build better models and forecasts for biodiversity, NEON will have an important role to play."